Well, I heard about some theft of copper air conditioning unit today... and would like to reflect on the heft of the jacketed exhaust system of a Triton. 37 pounds worth of heft. I bet that air conditioner is somewhere in the same scrap yard...

With the sudden windfall, I was swayed for a moment to put the proceeds towards a water lift muffler on the atomic four... snapped out of it when I realized I'd have to climb back inside the cockpit locker to fit it.

Claustrophobic moments are caused by places like the cockpit lockers of Pylasteki. I wedged myself in an attempt to remove the crusty bilge blower with snipped wiring. The beverage terrarium (its not an ice box!) will have to be removed before the fasteners are accessible.

Thanksgiving will prevent any work from getting done on board, but I'm still scheming up interior designs. Focusing on ventilation and cost effective ways to install a water tight forward hatch. Bomar and other extruded aluminum hatches are beautiful, but out of the question from a cost standpoint. The original teak and plexiglass leaks, and does not inspire confidence under foot. The sharp lip bruises ribs when the deck is plunging up and down during sail changes. Offshore I wish for the confidence that anything on deck can withstand breaking seas, so as Pylasteki is refit, she is refit with long distance in mind.

School is keeping me busy, as well as a few other projects... Thanks for all the comments, I'm glad to know Pylasteki has a loyal following and the correct pronunciation of her name! She won't stray far from her racing roots... where parts can be made lighter, they will. I do need to sell the 170% Carbon Fiber Genoa! It's a physically big sail that doesn't stow well.
Posted by Zach at 5:14 PM No comments:

The wonderfull world of ideas and new parts. 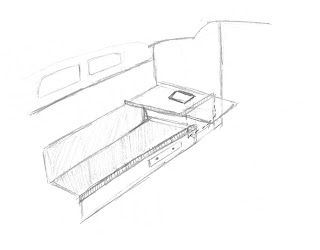 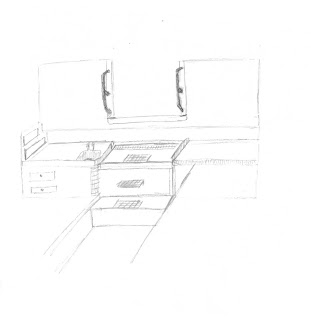 So... I've got a week before I can make it down to do any more hands on work on Pylasteki.

I've been working hot and heavy on a new interior layout. While I'm not a giant, the length of the berth allows my head... and feet, to be in contact with wood grain laminate. Its not that I hate wood grain laminate, though it is a bit faded, the ability to stretch and lounge to the fullest is what will make Pylasteki a floating home.

I've decided that the ice box will give way to the port side berth. I'll build a new ice box on the forward end, similar to the layout Dan Spurr suggests in "Spurr's Guide to Upgrading Your Cruising Sailboat." On the aft facing side of the icebox, a small countertop will extend over the berth with a canvas pouch for navigation tools and to the center a chart table will hinge. With any luck a somewhat usable table will come forth, without requiring the door to remain. (My shoulders wedge between the door jams, the trim is incredibly wide at almost two inches! I've removed the forward trim, and can now navigate through without leaping with my arms stretched out in front of me.....)

The galley countertop will be extended, full width across the boat giving a cubby for a sleeping bag... I haven’t figured out why so few boats are designed without a locker for bedding! A duplicate shelf will mirror the galley cupboard for symmetry. Currently the radio, and electrical panels are in the galley cupboard... My momma always told me not to play with plumbing and electricity at the same time... so the electrons will flow from the other side of the boat. 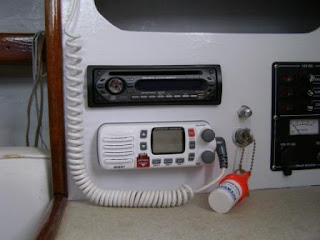 A new water tank will go under the cockpit sole and the area where the area where the engine once sat will be converted to stores. I’m trying to decide whether or not to glass in the deck plate in the cockpit sole. I'm following the K.I.S.S. principle, that the fewer holes there are, the less deck leaks I can have! The prop shaft is coming out, along with the the infernal stuffing box... maybe the threaded scar on my arm will go away with time... I am going to glass the propeller aperture and fair it into the hull, in hopes of some drag reduction. My outboard can be hoisted clear of the water, and that alone is worth a few tenths of a knot! Pylasteki is a sail boat!

If I can build an easily worked water tight deck hatch for a locker in the cockpit sole, I will. With cushions in the cockpit, reefing a sail or dropping sail before docking… it is difficult to manage. Dock lines and sail gaskets need a home that can be reached without turning your back to the tiller. The lazarette access will be glassed over, and a water tight hatch will go on the aft deck.

Going back down the hatch, I’ve got a hankering to place a bulkhead compass above the new icebox so it can be seen from the port berth, or observed by the galley slave. (I am the galley slave, though I am accepting resumes.)

She needs a deck recore. Thats a job that will be for spring.

She sheared a key way on the shaft coupling, and ended up with an outboard. I like the outboard, as it sips fuel, and I can set it in the cockpit to work on. Reverse actually works, and docking is much easier. A few weeks ago I pulled her engine. 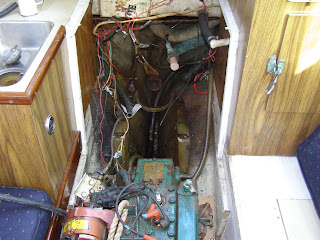 Then I removed the kitchen unit, and the fuel tank. What an awkward job, it required a lot of contortion and finger pinching. Now I have two cockpit lockers, a cause for celebration, though not quite as much joy as never having to check the oil on the Atomic Four again. Much to my amusement, no matter how many times I tried to start the engine with a funnel in the oil fill she never would start. Who says boats don't have souls? I had some help getting the Atomic Four out, a fellow at the yard used a fork lift and I guided it up out of the hole. Sure wish I had a forklift for pulling car engines...

I found some rotten plywood around the kitchen, so that will be fixed on my next trip down. I've removed the jacketed exhaust, engine wiring, gauges, and shifter linkage from the boat. She sits much higher in the back with all the weight removed, I will take a picture on the next trip. I rather like the lines, as her overhangs are even more accented!

When the fuel tank came out, so did a hunk of cockpit drain, so they need work. I'll be using plastic fittings! The side decks will drain into the cockpit through four 1 inch fittings, and the cockpit will drain through two flush mount 1 and one half inch drains. While not as elegant as the original design, it will be bullet proof and allow for capturing rain water.

Lastly, I'll pull the icebox and glass over the deck hatch. A cooler will do the trick in the mean time, and I'll gain a bunk that will fit my frame without touching on both ends!

The rig, and cosmetics will be a job for next summer, when I aim to move aboard.
Posted by Zach at 11:35 PM 1 comment:

I bought Pylasteki in . I sailed her down the sound, down the Inter Coastal Waterway (ICW) and in to . It was both an adventure, and a learning experience. I learned much about Atomic Four engines, and how to make them tick. I learned about transmission adjustment, and the joys of docking under sail. In addition to the mechanical, there was the lesson of dehydration, and the fright of having my jib on a collision course, much like the bow of a big white hulled ship! I learned that radio checks are no good if the guy a few slips over gives them, and the joys of navigating creeks at sunset. (Thanks !)

Along the way I met many friends, people stories and knowledge that are shared kindly. Along the way, I learned that sailors are tight knit group that help each other out, when they run aground and out of gas at the same time. Sometimes a boat just wants to take a break, and lets you know by springing leaks from less than obvious sources. (Thanks Billy!)

I met many people, and learned a whole heck of a lot, about myself while single handing through a Navy firing range… and about my family who at times were along for the ride. My Mom and brother were on board the day she tried to sink, and she was on board when the keyway sheared on the prop shaft. My dad drove countless hours to drop off an outboard, and help mount it on the transom to get out of Coinjock. Carter for diving and checking the prop and shaft in snake infested waters. My cousin Rob was on for the trek, Coinjock to Belhaven in a weekend, after helping asses the engine on Saturday… a 3am arrival in the Alligator river marina after beating across the all night! He was also there when I cast off the dock lines before eight (and breakfast!) somewhat lacking sleep to make another night time arrival in Belhaven. My brother was around the last days of the trip, and helped tie her up at her new home. 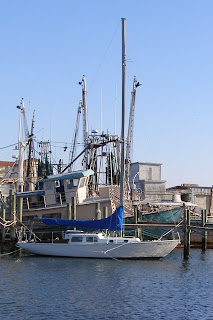 This is my blog, it is about my sailboat. She is a 28 foot, 1961 Pearson Triton, I'm refitting her to go cruising! Her name is Pylasteki, pronounced "Pla-sticky" as far as how she earned the name, I'm not sure. Its unique and suits a plastic boat well, though it is hard to spell!
Posted by Zach at 10:46 PM 4 comments: