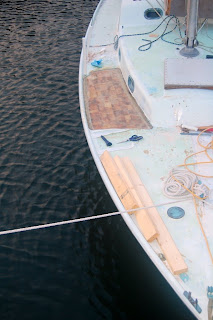 So... I have been working late on Pylasteki now that the great light in the sky stays up a bit longer.

Things I have learned: It takes 10 times as long to ungoop an almost cured epoxy job as it does a fully hardened polyester, or epoxy. I resorted to a 7 inch grinder with a 24 grit backing disc... which without the layer of epoxy slime would have ground through the inner skin in a half second flat. About an hour and a half later... I was back to the polyester inner skin. The corners took more time, as well as chiseling the mostly hardened but not really filler all the way around the edge.

After a few nights of cleaning, scraping, and de-gooping... I was ready to go. I hot coated the inner skin with epoxy and let it start to set while mixing West Systems and cabosil (fumed silica) to make a slurry that would just barely sag in which the new balsa was beaded in.

My friend Todd who runs the boatyard around the corner was showing off his silicone spatula technique for fairing out microballons... but by golly the 2 dollar one I picked up fits the corners of 1 and 2 qaurt mixing buckets like a glove. Less waste, and its the perfect tool for gooping in corners/filling up the crevass (southernese) left between the edge of the fiberglass and the balsawood. The tighter the fit the less epoxy you use... I use a filet knife to cut the balsa.

Then I laid down a sheet of plastic and loaded down some weight on top of the balsa. I came back the next day, pulled up the plastic and knocked off the blush (scotchbrite plus water) and cleaned off the peaks that form when you lay crinkly plastic on wet epoxy. I then ground down a few obvious high spots on the balsa... wiped everything down with acetone, and went to town glassing.

I'm using 17 ounce biax on this, the first two layers have no mat backing... the third will be 1708, as this is the last of my un-backed stuff.

Innovation: My glass cutting bench is on Noel... which is now up on the rail, making it a hundred yard walk with a 20 foot ladder in the way. I cut the glass in situ... using a rotary knife that they sell at fabric stores. I love this thing... Rolled it around the inside of the toe rails and cabin... with the plastic button laid up against each. For the second layer, I cut the toe rail side, then slid it towards the cabin top a 1/4 inch and cut the cabin side. Sweet... No torn tattered edge, and a perfect fit right off the bat... Err... with the exception of forgetting to cut the dart off of each end. (more on that later...)

I had a real tough time rolling out air bubbles in this piece, generally they roll out easily... but on this I had to mix up a little more resin and pour it on the bubble and tap it in with the straight edge of my squeedgee. Frustrating... I think I like the mat backed 1708 a little better, once it is wet out life is good. (Innovation 2... with a silicone spatula you can spread the leftover resin onto a large squeedgee and wipe it off back into the mixing container.

The leftover darts are something I came up with reworking the deck on Noel... pre-spatula. If you grind a round hole through the old glass, and cut a new square of cloth... you've got a place for the leftover resin to go. Once it is wet out nice, instead of letting it puddle in the center, work the excess to a corner or two (Depending if you eyeballed it or weighed the cloth...) When you come back with a grinder it takes a half second to make the 3 corners disappear into a poof of glass fiber. The resin filled one takes 15 seconds, and you are flush to the surrounding surface. I dig ways of doing things that take less time on the finesse side... (Ever tried to cut a circle out of biax with dull scissors? Yeah...