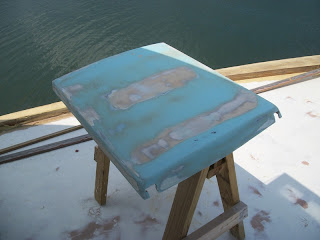 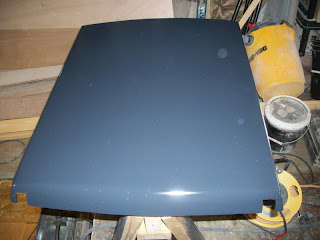 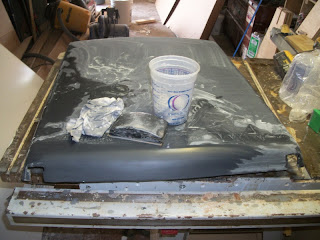 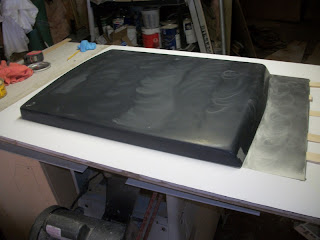 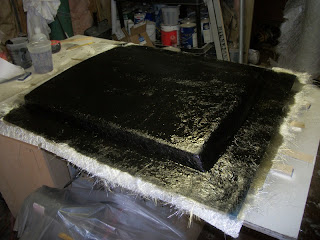 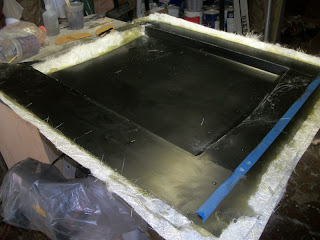 I spent some time building a mold off the hatch cover on Pylasteki last week, for practice and to make a spray hood.
I've been reading a lot about mold making, and polyester based products, as I don't have a whole lot of experience outside the realm of epoxy.
I sanded off all the old paint down to the gelcoat, and faired the top with a polyester fairing compound, akin to the infamous "bondo" but different brand. I long boarded with 80 grit, and worked the lows to shape.
I then applied a skim coat of 3m's Pirranah finishing putty, and sanded with 120. The last of the pin holes I filled with Evercoat's Ultrasmooth finishing putty, applied with a razor blade.
After that, I acetone washed everything. I scuffed the surface with 80 grit, and sprayed 15 mils of Duratec Surfacing Primer, and let it sit. I used a mil gauge to verify.
In the morning, I wet sanded with 800 grit all of the orange peel. I buffed it with a power buffer (Makita 9227c) and Aquabuff 2000. I goofed, and got saw dust on the buffing pad... some swirl marks.
After that I washed it with soap and water.
A few weeks ago I took two pieces of dura-rock tile board and epoxied them together on the top of my table saw, and contact cemented a sheet of formica over the top. I used this as a mold plate by placing the hatch lid on top.
I took plasticine modeling clay and filled all the cracks against the formica, and filled the openings at the front, with clay and smoothed it out as best as I could. Then I cleaned up all the dust around, and applied 3 coats of honey wax, a mold release wax.
I came back the next morning, and buffed off the wax and put on one last coat.
With that done, I got out mixing buckets and some black CCP sprayable tooling gel, catalyst, and stir sticks. I pulled out my binks 95, and put my biggest tip in it... catalyzed the gel, and put it in the cup, pulled the trigger... and nothing happened. It is a siphon feed gun, but would not pick up the tooling gel! (Will have to make an attempt to re-create this...)
So, with tooling gel that has a 15 minute pot life, I grabbed my junker hvlp gun with a 1.5 tip, and cranked up the air pressure to squirt it through after quickly tearing down and making sure it was clean. At this point, there wasn't much pot life left. I sprayed what I could, catalyzed another 16 ounce batch and sprayed almost all of it. before it gelled up. This resulted in just over 15 mils of gel. Ideally a mold would have 20-30 mils, but I decided to proceed with the thinner coat.
Thin gel coat, can alligator, or shrink and pull loose when you lay over it with the first layers of mat. I have seen pictures, so I wanted to see if it would happen for the sake of education... it didn't.
4 hours later, I came back and laid two layers of .75 ounce mat over the part. No scissor cuts, just tearing the mat off the roll so that the layers would blend together.
The next day I came back and laid 3 layers of 1.5 ounce mat, and the day after three more. When the last three layers had hardened, the mold broke loose from the formica sheet, so I decided to de-mold the plug (the original hatch cover)
I used plastic mixing sticks, and plastic squeedgees, and in a few minutes time it was out.
Then with a jigsaw, I cut the excess from around the edges with a jigsaw equipped with a diamod grit blade. It worked like a champ, until I hit an air pocket that was longer than the blade could cut without hitting the bottom of the pocket, bending the $12 little bugger... I switched over to a metal cutting blade.
Ideally when the glass is still "Green" and hardening but not all the way kicked you cut off the overhanging edge. I left each layer alone, as it was sitting on top of my table saw, and didn't want to blow fiberglass dust everywhere.
I will make a spacer to go on the flange around the mold, about an inch thick, and round it over. When I lay up the part in the mold, it will work as a sea hood, that happens to be the same shape and style of the original sliding hatch. Lots of work to build a sliding hatch, but the education has been worth it.
Zach
Posted by Zach at 3:54 PM No comments: