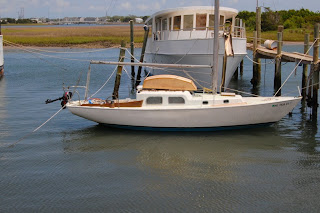 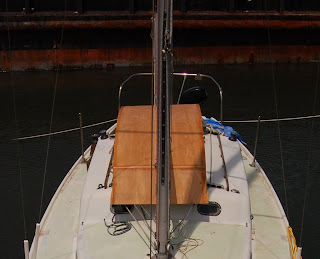 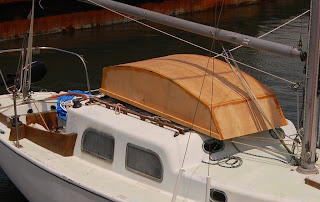 Well, I lost a filter for my respirator overboard... and in a snap decision grabbed dinky and tossed her in the water and gave chase.

That lasted ten feet or so, before the bow transom started wanting to separate from the sides... I used the pink stuff (bondo) for those fillets, rather than the bondo-glass I used for the sides and bottom. Still a little exciting that my wee little boat floated and didn't spontaneously explode like it probably should have. (I had not fiberglassed the joints... and no frames...1/4 inch luan... )

So, having ceremoniously dunked my dink... I decided it was time to put her back on the cabin top and see how much bigger I can build her next reincarnation. She is a mere 32 inches wide, to easily slide through the back hatch of my vw bus...

I hoisted up the boom almost to the end of the track, and spent some time pondering boom to head clearance, and boom gallows placement. I'm wanting a gallows to have something fixed at the aft end of the cockpit to attach an awning to... solar panels and to make reefing and hoisting and furling sail a little easier single handed.

I was about to button Pylasteki up for the night when I noticed that the amount of space for dinghys grew. By raising the boom, my boom vang went from nearly touching, to almost a foot of clearance at Dinkys bow rail. Hmm...

I'm thinking I'll build a full size tortoise, and maybe a nymph (both Phil Bolger designs) and see which one fits best. The tortoise clashes with the lines on

Anyone out there done a removable transom? It's a bit tight with a boat over the companionway hatch. Grin.

P.S. In other news, there is a Triton out of the water at another yard... so today I spent some time with the owner, and made a full scale template of the rudder and prop aperture. Weee! Exciting, as I've been mulling over this area of the boat for a long while.
Posted by Zach at 1:09 AM No comments:

Patterned out the new sole. 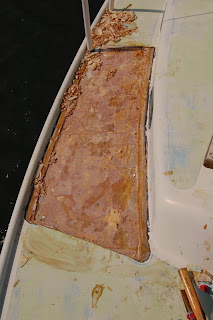 Cleaning out the new balsa... 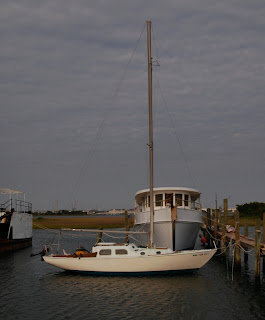 Look Ma, no sails. (Sigh... Trying to arrange a mast plucking ceremony sometime this week so I can redo the mast beam and bulkheads...) 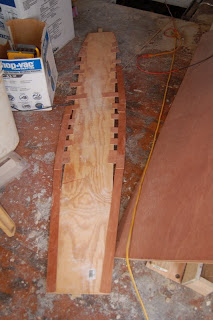 The template is stout enough to act as a temporary sole, so I no longer have to wander through the bilge. I made a pattern by measuring from the line of the old sole down two inches in the rear. The width of the bilge at that point was 12 inches wide, so I ripped a piece of scrap plywood to size and laid it in place. Since it was only supported on the ends, I took a junk 2x4 and ripped it in half so it would be light enough not to cause the ply to sag. I nailed it in place to the underside of the sheet, so it would not bow along its length.

I set my bevel gauge to the angle of the hull where it tapers down sharply at each end by laying the handle against the stock end of the plywood (a known flat surface) and laying the adjustable angle against the hull, on the underside of the plywood. Since the underside of the plywood is where it'll rest on the hull, it yields a tighter fit than trying to eyeball a cut of something you can't see. Marking the pivot of the bevel gauge, I laid it on top of the plywood marked it and cut my line. Cutting templates in the bilge of a boat requires a sharp handsaw... I like a cheap japanese style pull saw, less dust (Super skinny blade) and it doesn't tear the crappy plywood that is so tempting to use for patterns.

I laid a straight edge across the settees, and measured down to the plywood to keep the sole parallel to the settees. Measuring from the ceiling down to the sole, it too is parallel. By measuring along the line perpendicular to the settees, to prove that the sole is level athwartship to the other known planes. Since Pylasteki is floating, "level" is relative.

Since boats don't have straight lines in nature (grin) I still had to mark the curve. My friend Mark had told me about using 1/8th inch plywood and a glue gun, so I decided to give it a try....

To mark the curve I ripped 2 inch wide strips of 1/8th inch plywood, then cut them into 2 and 3 foot lengths, along with 3 and 4 inch lengths. With a hot glue gun I found the straight shots on the forward and aft ends could use the long strips, just laying against the hull. For the more curved areas I used the 3 and 4 inch strips, 2 inches apart touching the hull on the 2 inch side. It's a pretty elegant solution, instead of a tick stick (which the 12 inch wide strip of plywood would be the story board...) and marking the lines twice, once on the story board and once on the new template, the 1/8th inch plywood is the template the first time out.

So I pulled my template out of the bilge, and laid it upside down on another scrap piece of 1/2 inch plywood, which I ripped to 19 inches wide. I laid it on the floor and marked my line and played connect the dots with a straight edge. Since my largest gaps were 2 inches, over 8 feet the curve was smooth. and I didn't need to fool with a flexible batten like I would have with a tick stick to make a fair curve. I used a jigsaw to make the cut, when making templates I leave my pencil line on the part, as its hard to make it grow back once cut... grin. A small Stanley surform plane does quick work on shaping plywood without the curves flattening to much, and works faster than a block plane... though it wasn't needed.

Called up West Systems (The brand epoxy I have been using throughout the project...) and have an answer: If you mix up the resin and hardener, and it turns creamy colored you have moisture in the hardener.

It will still kick solid, if you have enough mass for it to exotherm and cook the moisture out... or if you catch it early on, wet out the area and then hit it with a heat gun.

Cool. Know for next time...

Pulling up the balsa, yielded a cool tool find. I headed back up to Greensboro for an evening to grab sails, and some interior trim that I had stored up there... and swung by Woodcraft. I blew my paycheck (always seems to happen...) and bought a Kutzall Carving disc. http://www.woodcraft.com/product.aspx?ProductID=148408&FamilyID=1846

It flies through fiberglass, and moves balsa like its not even there... What it doesn't do, is high traction nonskid. Noel has some of the toughest stuff I've come across. It wore the underside of this thing smooth... in 6 feet. (oops. expensive 6 feet!) So far it's chewed up to Four zirconium 40 grit flap discs... of the 7 inch variety. I don't think it's sand, but whatever it is... it's tougher than any aluminum oxide fiber backed sanding disc, wearing one smooth in minutes!
Posted by Zach at 9:12 AM No comments: