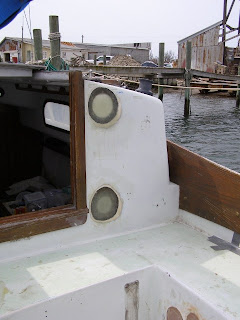 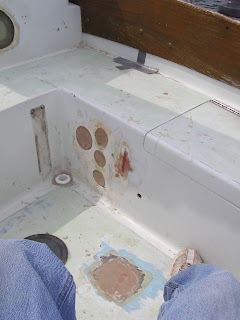 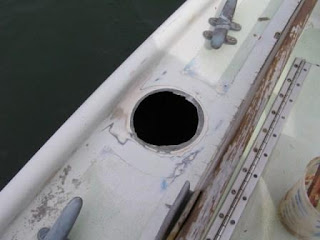 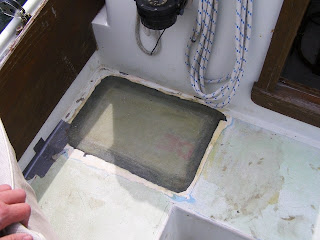 Took some pictures of the work so far. I'm delaying grinding off the 27 layers of paint and massively thick gelcoat of the deck until after the bow is recored, since she's afloat keeping the sun off the less than UV stable bits is important.

Top picture shows the two holes in the aft end of the cabin, the top had a speedometer (standard Horizon) which was disconnected by a previous owner. The lower hole had a teak block secured by four screws and was just an eye sore. I'm using west systems epoxy and biaxial glass for these repairs. I cut a ziplock bag into squares, and tape it to the surface so epoxy does not run all over the inside. A piece of stiff cardboard taped securely on top of the ziplock bag keeps things flat. This accounts for the reason why the upper hole is a brighter white than the lower, it still has cardboard backing it.

In the second picture you see where the gauges once lived, as well as the temporary cockpit drain to keep her form turning into a bathtub before I core the cockpit sole. I glassed a layer of finishing cloth to the inside of the cockpit locker, and beveled the outside edges of the holes and filled with cabosil, final fairing done with west systems 407. Since these are vertical, the chilly temperatures have given me flashbacks to a geology course where we discussed slumping for two weeks. Thickened epoxy runs down hill. I am using the cream colored paint above the gelcoat to keep everything smooth.

The shifter hole was ground out to a bevel, and filled with alternating layers of finishing cloth and biax cloth brining it up to flush. 407 filler was used to bring it up to the level of the blue antiskid. Its probably the strongest part of the cockpit sole.

Picture three shows where the fuel filler used to reside. This job consumed 5 sand paper disks on my random orbital sander. I haven't found the right sander to bevel this, and am pondering standing on my head and glassing it upside down from inside the locker. Not even my mouse sander will fit in this area and sand it any less than flush. (Flying sandpaper pads look a lot like skeet.)

Picture four shows where the icebox lid was. It has eight layers of biax, with a light cloth in between each to fill the weave. When I pulled the ACE hardware bag from the underside it left the ACE brand in red... I supported it with a piece of plywood to keep the underside flat. It is slightly thinner than the surrounding glass, but withstands my 190lbs jumping on top of it. Its probably the strongest part of the boat... grin.
Posted by Zach at 4:59 PM 2 comments: