I used sheet wax to build up a dam around the hatch opening on the lower cabin and laid up a tapered wedge of fiberglass to make a flat pad for the hatch to sit on.

The stress cracks above the portlight got ground out. Dremel with a ball burr through the gelcoat and filled. I started filling the lows in the interior, on the underside of the deck.

After that I added some more fiberglass to the hatch flange.

I ground the gelcoat off the starboard side of the boat. Everything except the underside of the counter at the transom.

The sun had eaten my old epoxy fiberglass work on the deck from 3-4 years ago. For peace of mind I decided to redo it, to not have to think about if it was still strong enough...

I ground the fiberglass off the starboard side deck, and replaced a some coring that I didn't do a few years back. The piece of divinycell went from the cockpit up to the aft deadlight of the main cabin, and resin coated the exposed balsa coring.

Leah came by for a bit and helped sand the old paint off the toe rails.

I finished grinding the bevels around the outside edge of the deck, water washed and sanded the epoxy coat. I wanted to jack a bit more crown in to the deck at the front of the cabin, so that under foot it would be stiffer. The camber of the deck makes it stiff, when you step on it the arch tries to flatten... When that arch is upside down it isn't doing its job.

When I laid the core a few years ago... I used a tool box to weight down that section, and it made a low spot. I screwed a 2x2 strip of pine, to the underside of deck and stacked paint stirrers in the middle by eye until the side deck had shape. I then ground the screws that were sticking through the deck off flush.

This cracked the coring along the center of the arch, so I ground out the crack and filled it with epoxy, let it gel and cut a strip of fiberglass for the side deck.

After that, I mixed up a batch of slow epoxy and started laying three layers of cloth. I air rolled it and worked all the excess resin out, and continued to roll until it had gelled. After that, I applied a quart and a half of Adtech Proseal to seal the weave of the cloth. 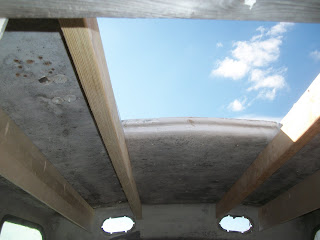 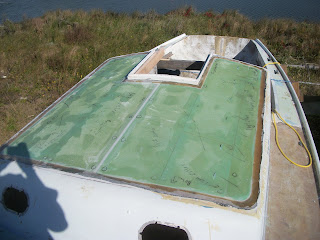 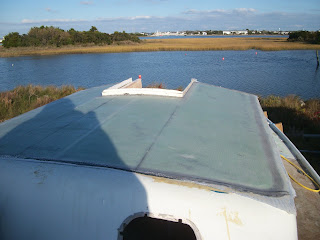 I took part of the week off of Noel, to do some work on Pylasteki.

A few weeks ago I recored the cabin top the traditional way, cutting off the top skin digging out the core and replacing it with divinycell foam topped with 3 layers of 17 ounce cloth.

I used pocket hole screws to hold an assortment of boards up to the underside of the cabin top, forcing the skin straight and flat where it wanted to sag down in the center.


I cut the bow deck out from just ahead of the cabin top up to the stem as I wasn't pleased with some of the first glass work I did on the boat, reusing the top skin to recore. It wasn't stiff under foot. I ground a 2x2 foot section off before picking up the saw and dropping the whole deck overboard.

It will go back as a water tight bulkhead at the chain locker and a deck accessed hatch.

Saturday and Sunday I cut out the chain locker bulkhead, and ground the tabbing out. I took the stem head fitting off, and tried to remove the bow chocks. The nuts on the underside were glassed over, so a saw will be needed.

Monday I sanded the paint off the inside of the cabin and underside of the deck. I brought in my rudder and ground the paint and glass off one side and started inspecting it. I need a new rudder shaft, and pintles and gudgeons. The hole in the gudgeons is about a half inch larger diameter than the pin. The bronze rudder shaft has gone pink, not pitted badly but on a blue water boat I don't want anything in the back of my mind that might be on the edge...

Tuesday I ground the old epoxy glass work I did on the port side deck. 4 year old work that the sun got the better of. Epoxy and UV light don't like each other much and the thin coat of paint I put on was long gone. I cut a template for the new glass out of tar paper, and cut three layers of cloth for port and starboard sides and laid glass on the port side. The glass work was probably fine, and was still solid and stiff, but for the time and cost of a gallon of resin I didn't want to think about it half way through the gulf stream...

Wednesday I sanded off a portion of the paint on the deck, and started faring the side deck. I removed the deadlights, and cleaned the old sealant off.

Thursday I started recoring the lower cabin house. I sounded it out, and drilled some test holes. It sounded dull on the port side and had some wet balsa in the center where the old pad eye was for boom bang. I cut around the line of the old non-skin. The skin popped up with no effort, the first layer of mat that bedded the core to the deck was dry except for two 2x4 by 2 foot sections that ripped some of the good balsa core out.

I ground out the bad balsa, and laid a 22x26 wide piece of divinycell foam in the center where it was in poor shape. I screw laminated this down with fender washers to pull the foam down into the glue after perforating the foam with a board that looked like a spike strip full of nails.

I made a template for the new glass work, tar paper again, and cut three layers of cloth. My new hatch takes a 24 11/16 x 24 11/16 hole, so I scooped out the balsa to the edge, but left the old hatch to retain the shape of the deck. I only put two layers right up to the hatch hole, as I'll be glassing in a drip edge on the underside, and building up a flat surface for the hatch to sit on. Directly behind the hatch is my solid glass pad that spans the bulkhead to accept the mast step, which I'll be building up level and flat.

While grinding the bevels around the edges I found the bad glass work extended up into the round of the front of the cabin, the top 3/16 of the 1/4 inch laminate was in good shape, but the lowest layer of mat directly against the core was dry. Grinding the bevel for the new work, meant half the bevel would be lying up against dry junk. I ground up into the fillet, and 1 1/2 inches into the solid face of the cabin just under the forward facing port lights. I hate grinding into fillets, as it goofs with the paint work and makes things more complicated. I'll end up pulling a 3+ inch radius fillet to cover the tabbing, and hopefully be able to float out the difference without changing the style of the boat to much...

With that done, I spent some time doing glass work inside the cabin where I found some old repairs to grind out in the cabin top, and cracks in the lower skin of the deck. After that was laid up, I acetone wiped the side of the hull and ground out some of the last of the gelcoat on the port side, up by the stem head fitting.

Then I went down and ground two of the through hull fittings I had glassed over previously and brought them flush to the hull.

Friday:
I ended up working in the morning. It looked like it was going to rain at any moment after the dew burned off (around 11) so I went out and water washed the epoxy, acetone wiped everything and sanded the lower cabin top. Then with fast hardener I laid the first layer of cloth down, and went back to working on Noel. That afternoon I sanded off the semi-cured epoxy and laid the next two layers.

I water washed and sanded out the glass work on the lower cabin top feathering out the edges, and worked out some of the highs and lows. With that done I started sanding off the paint around the cabin. Normally I leave the old paint beside the new glass so that the film of resin that sticks around, even after acetone wiping, gets sanded off and doesn't take any of the substrate with it. I'm sanding with 80 grit, though it takes awhile longer than 40 grit to get through the paint, you can do less damage with less scratches to fill later on.

I did not apply any putty, as the dew point and humidity was on the verge even before sunset rolled around. Epoxy and dew don't get along.

Sunday: So far, its been foggy wet and rainy. I've got some things to work on, laying up blanks for the bulkheads and foam for the foredeck.

Pictures to come, my camera died midway through so they don't include the "good stuff" of destruction.
Posted by Zach at 9:30 AM No comments: